The cash rate has been cut by a quarter of a percent to a record low of 2.00 per cent. The Reserve Bank hasn’t provided any guidance on future interest rate changes.

What does it all mean?

This is the decision that the economy had to have: an interest rate cut but with no guidance on future interest rate changes. This sends the signal to businesses and consumers to get on with business. Businesses and consumers can’t continue to stay on the sidelines on the expectation that rates will get even lower. The message from the Reserve Bank is that rates are low enough, now go out and embrace the attractive borrowing conditions and spend, invest and employ.

It all gets down to inflation, more specifically the outlook for inflation. Last month Reserve Bank Board members indicated that they wanted to see the March quarter inflation figures before deciding on another rate cut.

“Members also saw advantages in receiving more data, including on inflation, to assess whether or not the economy was on the previously forecast path and allowing more time for the economy to respond to the reduction in the cash rate earlier in the year.”

The March quarter inflation figures have come and gone. And the latest monthly inflation gauge (from TD Securities & Melbourne Institute) have come and gone. The clear result is that inflation is contained. And there has been little in terms of new activity data to suggest that inflation will exceed the Reserve Bank’s 2-3 per cent target range over the next year. In fact annual growth of non-tradable prices (domestic inflation) was at a decade low in the latest monthly inflation gauge. 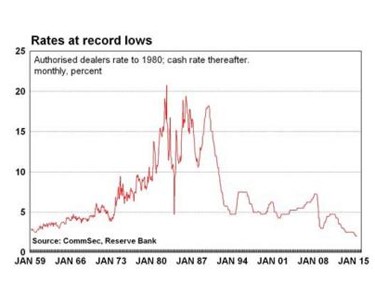 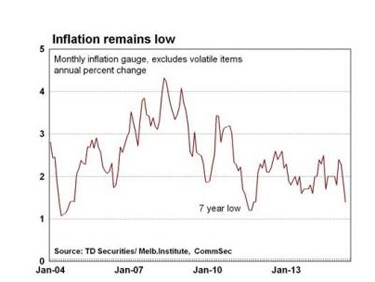 The Reserve Bank Board may have also been worried that another rate cut could lead to asset “bubbles” – unsustainable and unjustified growth of home prices and/or share prices. But home prices are really only going gangbusters in the Sydney market, and after a protracted period of softness. And a boom in terms of construction will lead to an increased supply of homes on the Sydney market. So supply will respond to the higher demand. And regulators are best placed to deal with any “irrational exuberance” in property markets. 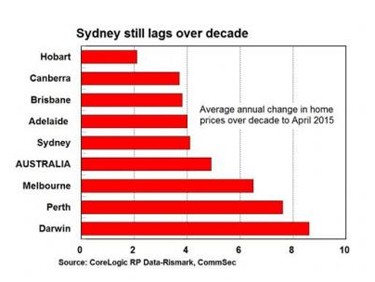 There have been nine rate cuts since November 2011.

What are the implications of today’s decision?

CommSec expects that this is the last rate cut. Provided that the Federal Budget rebuilds confidence, provided that the domestic economy continues to lift and provided that the global economy brightens, then the Reserve Bank shouldn’t need to do more this cycle in stimulating the economy.

As always, while the latest rate cut puts more money back in home-buyer pockets and improves the purchasing power of new home buyers, the rate cut will make it more difficult for retirees. 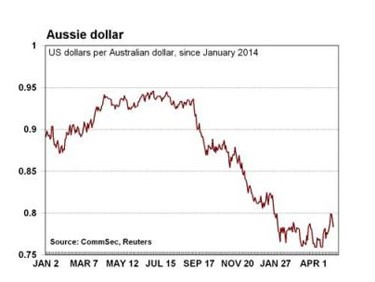 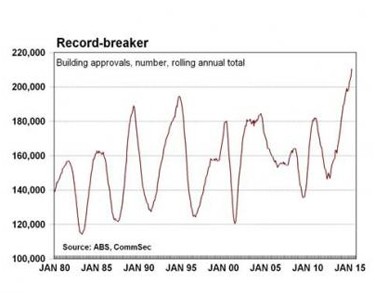 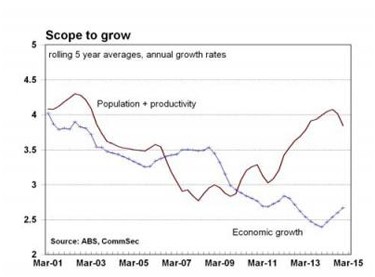 Comparing the two most recent statements

At its meeting today, the Board decided to leave the cash rate unchanged at 2.25 per cent.

Moderate growth in the global economy is expected in 2015, with the US economy continuing to strengthen, even as China's growth slows a little from last year's outcome.

Commodity prices have declined over the past year, in some cases sharply. The price of oil in particular is much lower than it was a year ago. These trends appear to reflect a combination of lower growth in demand and, more importantly, significant increases in supply. The much lower levels of energy prices will act to strengthen global output and temporarily to lower CPI inflation rates. Prices for key Australian exports have also been falling and therefore Australia's terms of trade are continuing to decline.

In Australia the available information suggests that growth is continuing at a below-trend pace, with overall domestic demand growth quite weak as business capital expenditure falls. As a result, the unemployment rate has gradually moved higher over the past year.

The economy is likely to be operating with a degree of spare capacity for some time yet. With growth in labour costs subdued, it appears likely that inflation will remain consistent with the target over the next one to two years, even with a lower exchange rate.

Credit is recording moderate growth overall. Growth in lending to investors in housing assets is stronger than to owner-occupiers, though neither appears to be picking up further at present. Lending to businesses, on the other hand, has been strengthening recently. Dwelling prices continue to rise strongly in Sydney, though trends have been more varied in a number of other cities. The Bank is working with other regulators to assess and contain risks that may arise from the housing market. In other asset markets, prices for equities and commercial property have risen, in part as a result of declining long-term interest rates.

The Australian dollar has declined noticeably against a rising US dollar over the past year, though less so against a basket of currencies. Further depreciation seems likely, particularly given the significant declines in key commodity prices. A lower exchange rate is likely to be needed to achieve balanced growth in the economy.

At today's meeting the Board judged that it was appropriate to hold interest rates steady for the time being. Further easing of policy may be appropriate over the period ahead, in order to foster sustainable growth in demand and inflation consistent with the target.

At its meeting today, the Board decided to lower the cash rate by 25 basis points to 2.0 per cent, effective 6 May 2015.

The global economy is expanding at a moderate pace, but commodity prices have declined over the past year, in some cases sharply.

These trends appear largely to reflect increased supply, including from Australia. Australia's terms of trade are falling nonetheless.

The Federal Reserve is expected to start increasing its policy rate later this year, but some other major central banks are stepping up the pace of unconventional policy measures. Hence, financial conditions remain very accommodative globally, with long-term borrowing rates for sovereigns and creditworthy private borrowers remarkably low.

In Australia, the available information suggests improved trends in household demand over the past six months and stronger growth in employment.

Looking ahead, the key drag on private demand is likely to be weakness in business capital expenditure in both the mining and non-mining sectors over the coming year. Public spending is also scheduled to be subdued. The economy is therefore likely to be operating with a degree of spare capacity for some time yet. Inflation is forecast to remain consistent with the target over the next one to two years, even with a lower exchange rate.

Low interest rates are acting to support borrowing and spending, and credit is recording moderate growth overall, with stronger lending to businesses of late. Growth in lending to the housing market has been steady over recent months. Dwelling prices continue to rise strongly in Sydney, though trends have been more varied in a number of other cities. The Bank is working with other regulators to assess and contain risks that may arise from the housing market. In other asset markets, prices for equities and commercial property have been supported by lower long-term interest rates.

The Australian dollar has declined noticeably against a rising US dollar over the past year, though less so against a basket of currencies. Further depreciation seems both likely and necessary, particularly given the significant declines in key commodity prices.
At today's meeting, the Board judged that the inflation outlook provided the opportunity for monetary policy to be eased further, so as to reinforce recent encouraging trends in household demand.

The following table shows current monthly repayments on a range of mortgages and projections if rates are cut by major lenders in response to the lower cash rate. 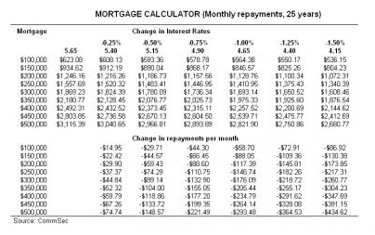