According to the United Kingdom's new Prime Minister, Theresa May, "Brexit means Brexit". But what does that mean? 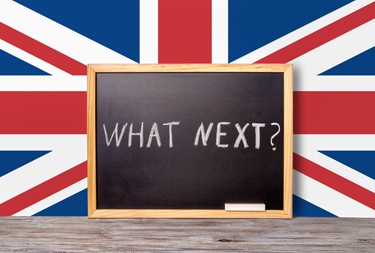 What we know so far is that the outcome of the 23 June vote represents a huge shock to the UK economy. In all likelihood, the increase in uncertainty about what happens next is already causing firms and households to postpone some spending until the dust settles.

Admittedly, some of the more recent indicators have suggested that the immediate downturn is not as severe as many had feared. But it is still early days. In Vanguard's view, we still predict that the British economy will suffer from a sharp slowdown in the second half of 2016 and early 2017, and may well suffer an outright recession.

Whether this turns into something more protracted will depend on whether the newly composed UK Government opts to negotiate for a "Brexit-lite", preserving the benefit of single-market membership, or a more costly "Brexit-heavy" option which would likely involve immigration restrictions at the expense of a deterioration in UK-European Union trade relations.

At the moment, the Government is talking about negotiating the best deal possible for the UK, but at some point, the trade-offs will need to be acknowledged. What seems likely is that, politically, matters are likely to get more, not less, messy as the UK embarks on the process of extracting itself from EU membership.

Despite all this turmoil, and with the exception of the sharp fall in the value of the British pound, equity markets have actually performed relatively strongly since the Brexit vote. Fixed income markets have been boosted by the additional policy accommodation from the Bank of England.

Even so, in the face of this continuing market uncertainty, Vanguard continues to communicate the message that investors should be wary of making radical changes to their portfolios in an attempt to circumvent this uncertainty.

At times like these, it is important for investors not to lose sight of the long-term objectives that their portfolios are designed to achieve. By maintaining such a disciplined approach, this should serve investors well in navigating the stormy seas that we are currently sailing through.